Quick Update before todays post: Yesterday I spoke of how gridlock in Washington would be problem for our economy in "To QE or Not To QE" and today appears an article entitled "Experts:Gridlock In Congress Will Threaten Economy". They raise some of the same points I did only a day later. FWIW

In light of the election and the FED meeting and the obsessing and nonstop coverage over both in the media I thought I would take a break from writing about either issue for at least today. Instead I want to look at an investment that makes sense in the current environment.

I am sure that there will be some people out there who will be uninterested in the recommendation I will be making in this post, but it is food for thought in the given environment. The company Philip Morris International (NYSE:PM) listed on the New York stock exchange is a spin off business from former parent Atria (NYSE:MO).  If you have a moral opposition to smoking I understand that and perhaps this recommendation is not for you dear reader, on the other hand if you are looking for yield and potential capital appreciation with a reasonably stable business even in a rough environment then this maybe for you.

While I personally do not smoke nor do I like to be around cigarette smoke I do not have a problem with those who partake of the habit, so long as it is out of my proximity.  I still have vivid memories of being a young child in the back seat of my father’s 67 Plymouth Fury III in the winter time with the windows rolled up and him puffing away on one of the cigarettes from is two pack a day ritual. I would be sitting there turning green from the noxious fumes just praying to make it where we were going so I could breathe fresh air. Living through my father’s cigarette addiction days aided me in never picking up the habit myself, however, it does not preclude me from making money off the cigarette companies. The reality is that while cigarettes are in my opinion a disgusting habit, it is not my right to dictate what someone chooses to put in their body. This is my position and it allows me to be guilt free taking a position in PM even if I wish people would not smoke; the reality is that people are going to smoke even if they know it is bad for them. Dear reader you may disagree with me and that is what makes America great, and to that end I say you have the option of not investing in PM or any other investment vehicle that makes or does something you cannot support or tolerate.

PM’s primary markets are European Union, Eastern Europe, the Middle East, Africa, Asia, Canada, and Latin America all areas with currencies that are stronger than the dollar, which means that when the profits are repatriated you should get a currency bump in light of the dollar’s continual down trend.  Additionally, PM had inked a deal in 2005 with China National Tobacco products to cross sell products in China an expanding cigarette market where smoking is culturally pervasive. Even though you can benefit from the company selling internationally it is not an ADR but a US company headquartered in New York and incorporated in Virginia.

Many people might be hesitant to invest in PM since they fear that the brand name of Philip Morris is so tarnished because of the nonstop cigarette bashing and lawsuits. Philip Morris international is actually a spinoff from Atria, so while the company has most of the identical brands, their market is outside the United States; whereas Altria derives it sales both internationally and domestically.  Without any domestic exposure PM is in a very strong position as it is reasonably insulated from litigation, although there is litigation in the countries that PM operates in almost every case the suits have been dismissed or overturned by higher courts. Part of the reason for different court outcomes is that smoking is viewed differently outside the US where it is a more accepted practice particularly in Europe and Asia, two of PM’s primary markets.  Even in the US, which as you know dear reader is a very litigious society in comparison the rest of the world there have been about 7,500 cases filed against tobacco companies over 50 years but less than 30 suits have been won in trials in that time.

Most people know that the cigarette companies have been cash machines over the years and very good dividend payers, which in the current environment fits the profile that conservative investors are seeking. PM is a large Cap stock with a market capitalization of roughly $107 Billion and sells for 1.6 times sales. PM is growing its earnings year over year and is projected to continue to do so in to 2011. After being spun off in 2008 which is the baseline for measuring earnings growth the company struggled in 2009 shrinking earnings by -3%. Assuming all goes well for PM in Q4 of 2010 and the company meets estimates earnings growth will have rebounded some 17%, which would be a swing of 14% year over year. Moreover, PM is projected to have a 16% earnings growth rate going forward in to 2011. In addition steady earnings growth PM sports a Return On Equity of 128% and a Return On Assets of over 20% both indicators of a strong company. PM has an Interest Coverage Ratio of 13.25 and a Quick Ratio of 1.13 so it is in a good position to cover its debts. Moreover, PM pays a dividend of $2.56 a share that works out to a yield of about 4.4%, which bests the 2.4 percent yield of the S & P. Furthermore, PM has raised the dividend each year since it was spun off and it is likely to continue to do so going forward.

While I believe that PM is in a good position financially the most attractive feature of PM to me is its growth potential. PM’s former parent company Altria controls something on the order of 50% of the US market which is saturated and shrinking thanks to the anti-smoking PSA ads and a general cultural shift in attitudes toward smoking, where as PM is not the top dog in the markets where it competes. In fact PM only has about 15% of the markets where it pedals its wares, so there is room to muscle in promote and capitalize on its iconic brand names worldwide. Furthermore, PM is selling and expanding in to markets where smoking is still in vogue and areas of the world where personal income is rising since their economies are expanding like Brazil and Singapore as well as tapping in to China.

As with any investment there are always risks but one needs to make a calculated assessment before investing. The risks as I see it are threefold: 1) governments around the world could implement excise and or VAT taxes that choke off demand 2) The rest of the world could develop an anti-smoking bias like the US 3) the Dollar could suddenly turn around and rise against all currencies in something other than a short lived rally. From a personal perspective I believe the changes in excise and or VAT taxes pose the greatest threat but so far even the tax happy EU has called for only “reasonable “ increases in excise taxes until 2018 and other countries will probably pursue a gradual tax policy too. The other wild card is if the EU slips back in to severe crisis and consumption goes down there more than it increase in PM’s growing segments that could cause a hit to PM’s earnings which would probably more impact their stock price than the dividend payout.

Currently PM shares are changing hands around $58 per share and one could initiate a position here but I would be more comfortable on a pull back toward the 50 day moving average around $55.50. Currently PM is bouncing right up along its 45 degree trend line, but it is my impression that we will be getting a pull back in the markets in the very near future which will give an investor a better entry point. I would try and acquire PM near the 50 day and I surely would not chase it over $60, let it come to you and then hold on and collect the dividends and wait for the eventual capital appreciation. 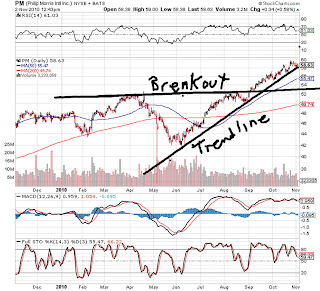