I think the Dollar Emperor has little to no clothes.

We keep hearing all about how the US Dollar is going to rally and it seems to get every chance possible, yet it consistently stymies the bulls. Yes, the Dollar is the best looking horse in the glue factory but lets face facts it is still a deeply flawed currency. Realistically on a day when S & P comes out again and downgrades Greece to a point where default is close to a lock investors are not piling in to the Dollar. Something has changed in the market psyche since in the past an event like this would have caused a dramatic rise in the Dollar, instead we have the chart below:

The DXY built a reverse head and shoulders for most of the day only to come up to the neckline where a breakout should have been a given under the circumstances. Instead just before the 2pm hour the rug was pulled out from underneath that market and the Dollar dropped like a stone. I know there are many out there calling for a bull run in the dollar but I am not one of them. I guess it could rally up to resistance around 77.5 on the DXY but I don't see the catalyst for that to happen. 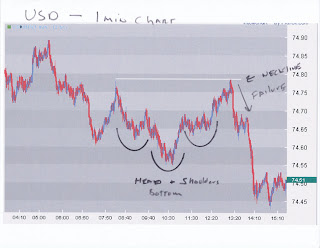 In the meantime I am beginning to sense that the Precious Metals sector which is in a seasonally weak period of the year at present has so much negativity towards it that it is just waiting for an opening to spring to life. Over the past couple weeks I monitored the articles about the precious metals and with out a doubt the sentiment was easily 2 bearish PM articles for every bullish one.This is not what tops are made of but bottoms.Moreover, even with the declines gold has endured the yellow metal appears to be in more of a trading range from $1510 or so to $1535 or so and there have been no earth shattering spikes up or down during this period. Tops in the precious metals sector are rarely made with a nice rounding pattern like the one in the chart below but instead with an exhaustion spike.